On the other hand...

I could finish the Queen of the Tearling, but I'm having a tough time staying interested and I own it....on the other hand...I could read my library copy of Queen of Shadows, the fourth book in the Throne of Glass series. No contest: Queen of Shadows.

I could take a nap because someone has decided to go back to waking up a couple of times a night instead of spoiling mama with only waking up once a night and right now both children are napping at THE SAME TIME...on the other hand...I could write a blog post which I've been putting on my to-do list at least three times a week for a month. And maybe sneak in a 15 minute power nap after?

I could tell everyone how I've started listening to The Night Circus and I'm already a little in love with it (yes, I know everyone and their dog has read this book already. I'm never going to be up on new books again. Just a heads-up)....on the other hand...there is no other hand. Having this cued up in Audible may be the best thing that ever happened to my housecleaning/running/knitting.

Yesterday, I finished week 3, day 3 of Couch to 5k. Yay! Running! I'm feeling motivated so far, and now just need to stay motivated enough to add in a day or two (realistically, a day) of yoga during the week, and a little bit of core work to help the running go better (and to help everything go better, really). I'm inspired by the plank these days, especially after my friend Tess posted a link about plank exercises. No other hand here....just an attempt to get my booty in gear. Next up...goals for 2016. 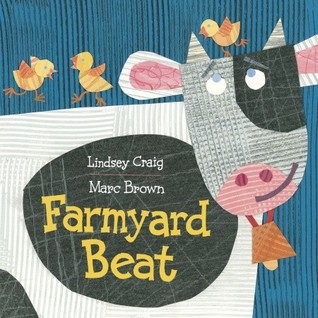 Farmyard Beat, by Lindsey Craig and Marc Brown is seriously adorable and fun. Even when you are asked to read it " 'gain!" about 30 times in a row.

I started Queen of the Tearling last week, continuing my streak of reading books that were popular and recommended to me so long ago I can't remember who recommended it. Haven't gotten very far yet, but so far, so good. And isn't that an awesome cover? The downside to reading the ebook.

3. For most of the years we lived in North Carolina, we had a tradition of sharing a New Year's Day breakfast with our friends (the ones we'd partied with the night before, of course) where we'd all sit around and talk about the previous year and our goals and dreams for the coming year. So I'm in the habit of participating in the traditional end-of-the-year reflection and contemplation, and I've been thinking about it off and on the past week or two. And I'm sure I'll talk about it more some other time, but meanwhile....

4. Now that it's December, I'm ready to embrace the Christmas season! Our calendar is about maxed out on planned activities -- Christmas party, family tree-decorating-movie-watching, cookie exchange, lunch with Santa, and a plan to drive around and look at Christmas lights. Now I've just got to fit Christmas shopping in there somewhere, and we live in Houston so...the lawn really needs to be mowed (thankfully that's Jeremy's job still). And hopefully we'll have time for a little spontaneous fun and/or relaxing on the couch to a Christmas movie or two.

5. And speaking of Christmas movies! I love hearing about everyone's favorite Christmas movies. From Elf to Die Hard, White Christmas (this girl's favorite) or It's a Wonderful Life and all the many versions of A Christmas Carol or Santa Claus or your very favorite made for t.v. holiday cheesefest.
Posted by Amanda W at 1:21 PM 3 comments: