A new Richard Jury mystery by Martha Grimes is out now, and I'm looking forward to reading it. I first discovered Richard Jury about eight years ago at a library book sale. I picked up a dollar paperback called The Lamorna Wink because it sounded like the kind of cold and rainy British mystery that I love. It took a bit for me to get into -- because it's smack in the middle of the series, there were some character assumptions that I just didn't get. But the story stands on its own, and ultimately I thoroughly enjoyed it. Since then, I've picked up most of the books in the Richard Jury series and loved each one. Jury himself is a complicated character whom the reader gets to know over the course of the series. And like a real person, Jury evolves as the series progresses, changing over time, circumstances, and as a reaction to life events. Apart from Jury, the series also contains a great cast of secondary characters: Melrose Plant and Alfred Wiggins appear the most consistently in each book, but there are a number of other characters that readers get to know throughout the series: Mrs. Wasserman, Carole-Anne Palutski, Stan Keeler, Marshal Trueblood, Diane DeMorney, Vivian Rivington, Lady Agatha...all populate the world of Richard Jury and all come to feel like friends (or friendly enemies, depending).

In addition to writing great characters, Martha Grimes also tells a good mystery. Her stories are well plotted and beautifully written. There are layers beyond just the who-done-it aspect of the story, questions asked and sometimes not answered. There is a darkness to some of the books, as you'd expect when the main character deals with death on a regular basis -- including death that sometimes strikes close to home.

And finally, Grimes sets the stage well. Each book is a trip to England, sometimes London, sometimes a small village. But when you sit down with one of the Richard Jury books, you'll want easy access to a pint, a pub, and a good cup of tea.

Grimes has written several non-Jury related novels, and though I've only read one of them (Foul Matter, an absolutely fantastic dark comedy about the publishing world), it only increased my appreciation for Grimes' work.

Bottom line: if you like a good British police mystery, complicated characters, or stories with excellent ensemble casts, you can't do much better than Martha Grimes and Richard Jury.
Posted by Amanda W at 9:26 AM No comments:

Ah, summer. By the end of August I'm just about sick of you (and I live in Texas so...that's about halfway through "summer"), but in June I'm breathing deeply of your sun-drenched air and loving it. It's the heat that gets to me eventually, but here are a few things I love about summer:

1. Long, lazy days.
2. Thunderstorms.
3. Freshly mown grass.
4. An abundance of fresh and tasty fruits and vegetables.
5. Water time: hanging out at the pool, the ocean, the lake, the river, the swimming hole.
and especially....

So You Think You Can Dance

Happy Summer!
Posted by Amanda W at 9:32 AM No comments:

I love cookbooks. In the age of Pinterest, e-readers, tablets, and smart phones, one might say that cookbooks are obsolete and unnecessary. To which I say...pshhh. Cookbooks are awesome. (very well-thought out argument there, yes?). The best cookbooks are works of art that happen to be full of useful and tasty information. The intersection of form and function -- from the charity books put together by civic or church groups full of grandma's best recipes and all the classics, to the niche cookbook, from the basic workhorse, to the gourmet tome. While I love all kinds of cookbooks, my absolute favorites have a few things going for them: 1. Recipes that I want to make, with clear instructions. I mean, the point is to cook, right? 2. Well-written "other" matter -- be it introductions, chapter descriptions, or recipe descriptions. I love it when a cookbook tells a story (or many stories). 3. Gorgeous illustrations.

Here are just a few in my collection that I'd recommend to anyone: 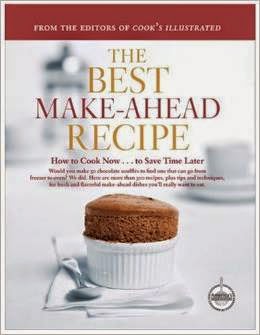 The Best Make-Ahead Recipe, by Cook's Illustrated Magazine.
Not only does this book have delicious recipes, it's practically like taking a cooking class. In each recipe, the authors go through their steps in creating the recipe, what worked and what didn't, and how they came
to the final product. You can't go wrong with any Cook's Illustrated cookbook (I have two), but this was the first I ever had.

Jamie at Home, by Jamie Oliver. 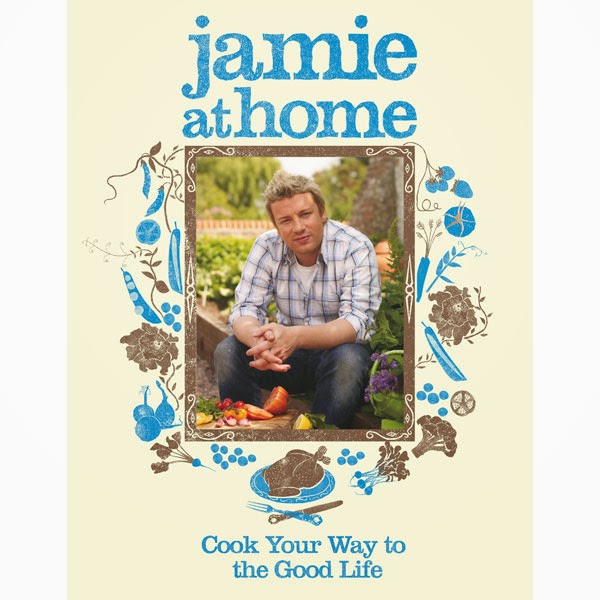 I'm hard pressed to say which of my two Jamie Oliver cookbooks I like most, but while I've cooked more recipes from Jamie's Food Revolution, Jamie at Home holds a special place in my heart and kitchen because it's absolutely gorgeous. Plus, it's kind of a gardening and cookbook all in one. Jamie has a fun, conversational style of writing too, which I always enjoy. 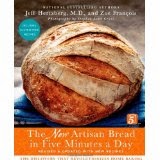 Artisan Bread in Five Minutes a Day, by Jeff Hertzberg and Zoe
Francois. In a nutshell: you, too, can make delicious bread. Great instructions, illustrations, and final product.

Yes, I titled this post as though it's going to be an ongoing thing...when, let's be honest, that's kind of wishful thinking these days. (hello, newborn! you crazy little person you. I love you to bits).

I like storytelling in many forms, including television shows. While I'm home all day these days, I sometimes put a show on while I'm doing housework or feeding the Peanut. And a couple of weeks ago I discovered a new show to crush on: The Mindy Project. I needed something funny I could consume in short bites, and this fit the bill exactly -- so much so that I watched both existing seasons in about a week and a half!

The cast: chemistry, acting, comedic timing. Watching it feels natural, which is a refreshing change from the forced feeling of so many sitcoms. To me, this naturalness is the mark of a watchable comedy, and a no-brainer for the best.

The humor: it's not perfect (I recently read an article talking about why all the "Mindy loves to eat" jokes are problematic, and I agree to an extent), but I like that it doesn't take itself seriously. It's not vulgar (there's plenty of sex story-lines, but it's not crass, know what I mean?), or mean.

The (presence of) character development: whether or not this continues to be something I like remains to be seen (because we all know shows where the characters start acting like crazy lunatic versions of themselves -- it can be the downfall of a really great show), but at the moment, I like that they've been able to create three dimensional characters.

So, now I'm in the mood for comedy, and I may have to give a rewatch to one of my favorites (I'm leaning toward The Cosby Show or Spaced,) -- unless anyone out there has a good recommendation?
Posted by Amanda W at 12:12 PM 2 comments:

I'm not a big non-fiction reader -- I tend to start a lot of non-fiction, then lose steam. But nothing gets me into a non-fiction book faster than that oh-crap-I-don't-know-what-I'm-doing feeling of new parenthood. A friend loaned me The Girlfriend's Guide to the First Year, by Vicki Lovine and, I've got to admit that I didn't love it.
I can't put my finger on anything particularly terrible or offensive, it was just kind of...blah. Not like a girlfriend sharing her experiences in the first year of motherhood, but like a person acting like what they think a girlfriend would act like when sharing her experiences. Some of it was funny, but a lot of it just felt like it was trying too hard. And while it did have some helpful and funny information in it (particularly the section on the birth and post-birth hospital experience), nothing you couldn't find elsewhere.

Sleeping Through the Night, by Jodi Mindell, on the other hand, is excellent. It was gifted to us by a psychologist friend who has actually met the author, a well-known sleep expert. Mindell gives you a lot of general information about sleep in babies, children, and adults. She begins by talking briefly about behavior modification in general (because sleep training is essentially a specific behavior modification), then she lays out simple strategies for getting babies and toddlers to sleep better, and even strategies for adults who have sleep issues. Her approach is very practical, low-key, and adaptable to the personalities of individual parents and children. There's no DO IT THIS WAY NOW. The book is very much "here are some strategies, I think this one works best, but do what works best for you. The main thing is that everyone gets some sleep." She also talks about sleep issues like night terrors, sleep walking, sleep talking, and insomnia (in adults). And if there is any scientific information about sleep or any sleep issue, she gives you the facts and figures in a very understandable and approachable way. Of course, only time will tell how effective I find her information, but from a read-through standpoint, I thoroughly enjoyed it and plan to give her strategy a try.